Launch day! At least it is in Redmond where the Visual Studio team is celebrating the launch of VS 2019, and no, it's not an April Fools joke (that was yesterday).

If you haven't already, check out the free preview editions: community, professional and enterprise. You can get them  here: https://visualstudio.microsoft.com/vs/preview/. There's no need to delete or stop using earlier versions; you can run 2019 alongside VS 2017, 2015 or whatever.

Remember how it used to take, like, days to install? Well, now it zips along pretty quick, and you can install new bits on the fly as you need them for different kinds of projects. Just bring up the installer and pick and choose what you want on your local development machine: 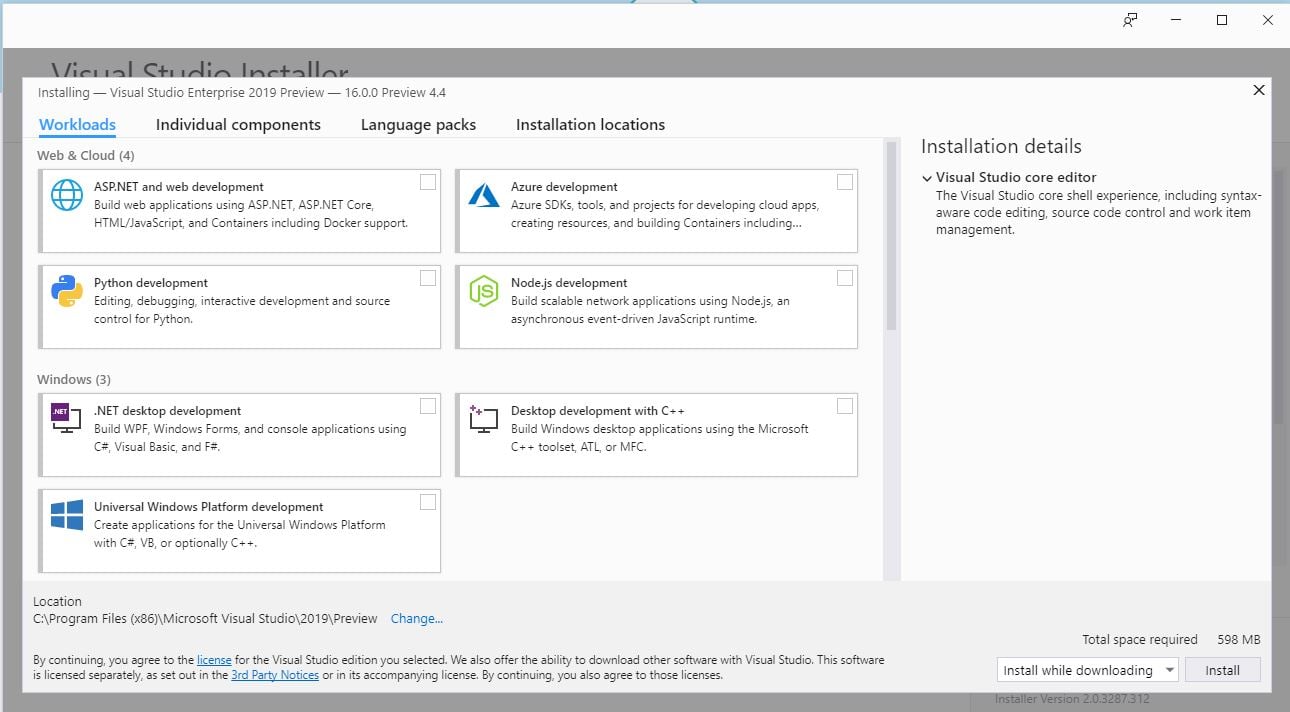 For what I do, I picked "ASP.NET and web development" and ".Net desktop development." Took about 5 minutes to get everything ready.

Why Visual Studio 2019 can be a game changer for you

I spend roughly equal amounts of time in three IDEs: Visual Basic 6, Visual Studio Code, and Visual Studio 2017 (now 2019). I've been using Visual Studio regularly since 2008 and the recurring theme in each new release is making developers more productive. Microsoft has always worked hard to support the full development stack for their platforms, and now with Azure DevOps and VS 2019 it's even better than ever. When you combine those pieces (or Team Foundation Server if you're not into the whole cloud hosted tools thing) you've got a fully baked solution to get into the world of CI/CD and DevOps.

For example, my start page really simplifies getting my work organized:

I like the expanded list of recent projects and the ability to connect directly to a repo here.

Ready to get there? We'll help.

There's only two reasons you're reading this blog post: either you're a masochist or you've got some legacy app written in VB6, PowerBuilder, or something similarly ancient, creaky, and needing to be put down.

My world--and all of us here at Mobilize.Net--is focused like the Roman god Janus on simultaneously the past and the future. Our customers get in touch because they are stuck in the past, with VB6 or PowerBuilder or Delphi or some other legacy platform. Maybe it's the more recent past with a C#/Winforms desktop app that they dearly want to move to the web. And we help them move to not only the present but really the future with web native code using Angular, ASP.NET Core, MVC architecture: basically what they need to start using CI/CD, DevOps, container deployment, and more. Visual Studio 2019 sits at the hub of that wheel.

VB6 was awesome--when it shipped--but today it's an antique. Maintaining code in the original Visual Studio IDE that supported VB6 is like driving a 1994 Volvo to work every day--sure it's a classic, but it's also no Tesla. Visual Studio 2019 is like the Tesla Model S of development environments.