Prevent the application from exiting immediately after starting

Standard EXE applications written in VB6 can be started either from a Main sub or a startup form. 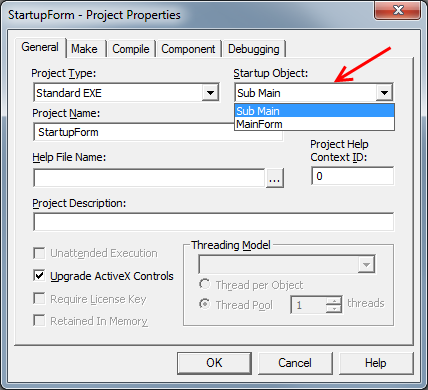 Selection of the startup object for an Standard EXE project in VB6.

The use of the Main sub is a very common practice in large applications, because it allows the execution of initialization logic before the load of the main form of the application, and allows a separation of this logic from the logic of the form.

When an application that uses the Main sub as startup object is migrated using the VBUC, equivalent code is generated in .NET, however, due to differences in the behavior of VB6 and the .NET Framework the applications behave different. Some manual changes are required to achieve functional equivalence in this case.

In VB6, all the code in the Main sub is executed and the method ends, but the application continues to run while a form is displayed. In .NET on the other hand, the application will exit as soon as the Main method exits, any open form at that point will be closed automatically.

The following sections describe sample scenarios where this behavior affects the generated code and what kind of manual changes are required to achieve functional equivalence.

The basic scenario is the invocation of the main form of the application from the Main sub, this is described here.

We have a simple application with a Main module which contains the Main sub, and a main form that is displayed in the Main sub. 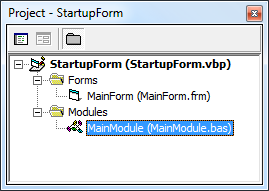 This is the code for the Main module:

VB6 code for the Main module.

The migration tool generates lines that are equivalent to the lines in the original application, it also generates an EWI informing the user that the "application will terminate when Sub Main() finishes".

If we execute this code, the Main Form window will be displayed but the application will exit as soon as the Main method exits, closing the window inmediately. To fix this behavior, we have two options:

For this application, as it is a simple one, we will use the first option, the other option will be seen in a later example.

The use of the System.Windows.Forms.Form.ShowDialog() method is straightforward. In the case of our sample application we just need to replace the call to Show() for a call to ShowDialog and we are good to go.

This simple change makes the form visible and stops the execution of any code after the ShowDialog call until the form is closed, achieving this way functional equivalence for the migrated application.

The main disadvantage of using ShowDialog() is that this method stops the execution of the caller method until the form is closed, this means that if the source application has logic that is executed after the form is displayed, tat logic will be executed only when the form is closed.

Another limitation is that if for some reason the application consists of more than one form, if all forms are displayed using the ShowDialog() then they will be displayed sequentially (the second after the first one is closed and so on).

The following example shows a (slightly) more complex application and a more general solution for the problem of the application exiting inmediately after it is loaded.

Here’s a frequent way of starting applications in VB6, which will not work with the previous solution of using the ShowDialog() method.

VB6 code for the Main module.

VB6 code for the SplashForm.

If we use the previous solution, two problems will arise:

Although this approach works fine, it requires several manual changes to the code (even for a small application) and it also has the issue that the initialization code will be executed before showing the splash screen, which means that the application might take longer to start.

The following solution requires the addition of two lines to the application’s Main method that will provide functional equivalence to any application in a simple way.

General solution to solve the problem.