Components provide reusable code in the form of objects. A VB6 application that uses a component’s code, by creating objects and calling their properties and methods, is referred to as a client. And the DLL that exposes those components is referred as the server.

Components can run either in-process or out-of-process with respect to the clients that use their objects. An out-of-process component, or ActiveX EXE, runs in its own address space. The client is usually an application running in another process.

An ActiveX EXE usually define classes and these classes can have different instancing settings: 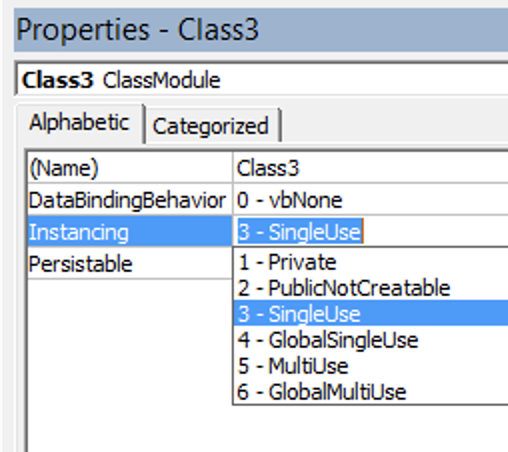 The VBUC will identify if your project is an ActiveX EXE. In your solution list it will mark its type as OleExe and the Reference Guid is the Guid that is used in other projects to reference this ActiveX DLL.

In addition to the ComVisible attribute for the assembly members, the .Net project is also marked as a COM Visible.

The exposed classed will also have the necessary COM attributes added. For a source code example see here.

However in this approach no OutOfProcess support is provided. If you need this Dll to run out of process you can use a DllSurrogate

The DllSurrogate is setup in the Registry. After you register your assembly for COM

you need to add two registry entries. For example:

One of the main differences between VB6 ActiveX and .NET assemblies is the way of how the component is instantiated (e.g MultiUse, GlobalMultiuse, etc). This initialization determines the lifetime behavior for the component. With this option the code is converted using pure .NET code and the VB6 ActiveX instantiation models won’t be supported.