Where are legacy applications found?

I was fooling around with Google Maps the other day and got to thinking it would be cool to visually show where our customers are around the world. Google Maps lets you create your own map with a database (simple flat file like CSV or Excel worksheet) of address data.  For this exercise I simply used city, state/region, and country. There's a limit on how much data you can map, however: 2000 data points. I had way more than that, but discovered the 2k limit is per layer and a map can have 5 layers, so I was able to plot 10,000 data points in total.

While 10,000 isn't anywhere near all the customer addresses I had wanted to map, it's certainly a statistically significant sample size, so I mapped that. (Yes I know there are GIS systems that could handle the entire data set but they cost money and this was just for giggles.)

Google has a default icon for each data point it plots, and no matter which alternate icon you choose they are all the same size (which is big), so a lot of data gets obscured when you are zoomed out. Here's the whole map: 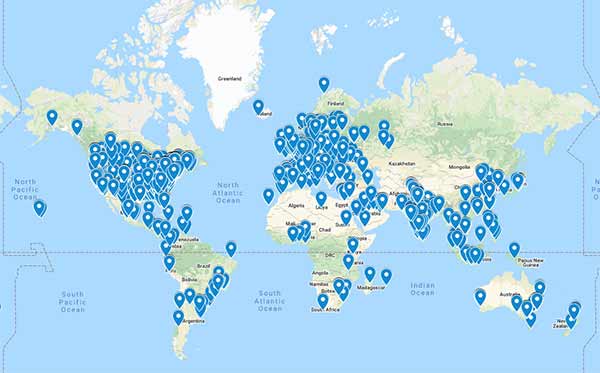 Each point (including the ones hidden behind others) represents one recent user of one of our products. Since the only products we make target legacy client-server or database applications, it's safe to say at some level this image represents a kind of density plot of where those applications can be found. Of course, this only shows the most recent 10,000, but it seems reasonable to assume an older list of 10,000 would plot in a similar manner.

What this says, at first glance, is kind of predictable: most of the clustering is in three areas: North America, Europe, and India. Let's drill down.

Where are the legacy applications in North America? 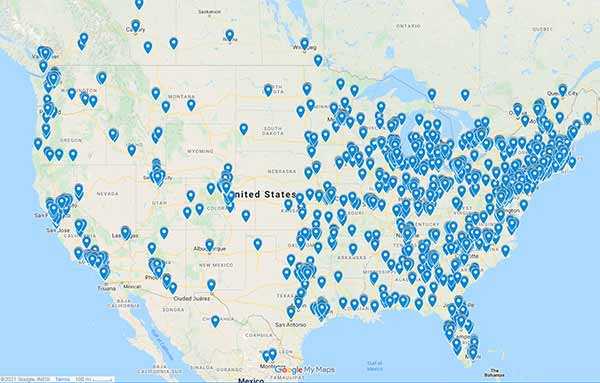 Not surprisingly, this looks a lot like the distribution of the US population (image from US Census Bureau): 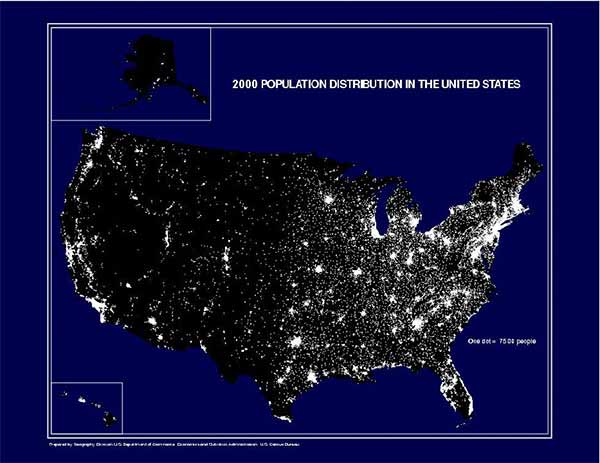 I've been hearing some speculation that because of the large shift toward remote working (due to the current unpleasantness), this population distribution may change in the future, but for now it's pretty obvious most people live in urban/metro areas. A few outliers caught my eye, however.

The I-5 corridor from Vancouver, BC down to San Diego runs through several hotbeds of tech, including Seattle, Portland, LA, and the San Francisco Bay area. But here we see someone in Longview, WA (a logging town devastated by the closure of mills in the 80s and 90s) and someone living SE of Portland out towards Mt. Hood. I like to imagine the latter as a kind of Grizzly Adams-looking character, living in a one room log cabin deep in the forest. Maybe there's a cell tower nearby, or satellite internet? If you're reading this, drop me a line with a picture of your hideaway.

The Bay Area is what a lot of people think of when they think of tech companies, so let's take a peek: 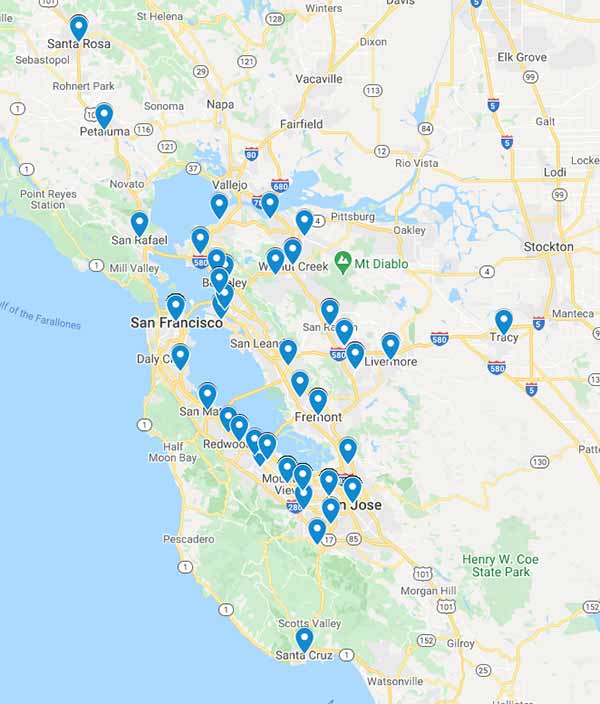 All the usual suspects are there, even if you can't see them on this cap: San Mateo, Mountain View, San Jose, but also Petaluma and Tracy. Tracy? What's going on in Tracy, CA?

Let's put the top down to enjoy the California weather, find some Beach Boys on Spotify for the tunes, and motor down US 1 to the City of Angels: LA. 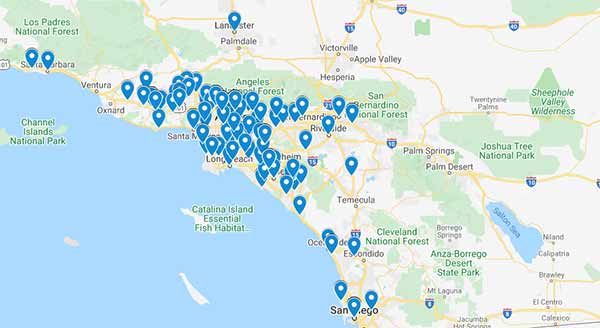 I have no idea what's going on up in Tracy, but I know from visiting some customers in LA that there's a lot of manufacturing in SoCal, along with aerospace, financial services, and agriculture. And all those verticals have legacy client-server apps they are trying to modernize.

California is so huge that if it were a country it would be the 5th largest economy in the world, so it's not surprising to find a bunch of customers scattered around the capitol in Sacramento. 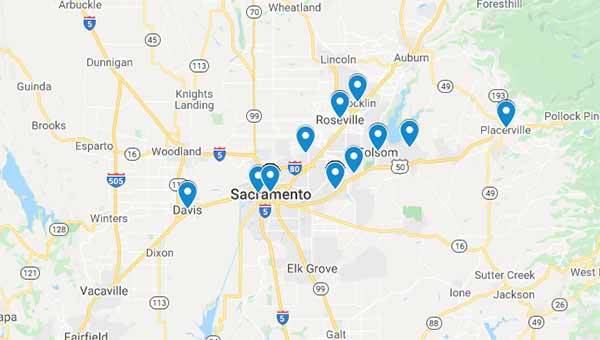 I hope whoever is working on a legacy app in Folsom isn't trying to upgrade the security software at the prison.

Let's leave the convertible in the airport parking lot and fly cross country:

Here's your mid-west manufacturing cities, many of which are re-inventing themselves around more modern manufacturing  and systems integration services. Plenty of legacy there that needs modernizing. And of course, there's an enormous vein of legacy customers from the Washington, DC area up through Philadelphia, New York, and Boston.

Nobody is left out: there are legacy migrations going on in all 50 states, including Alaska and Hawaii.

Where are the legacy applications in Europe? 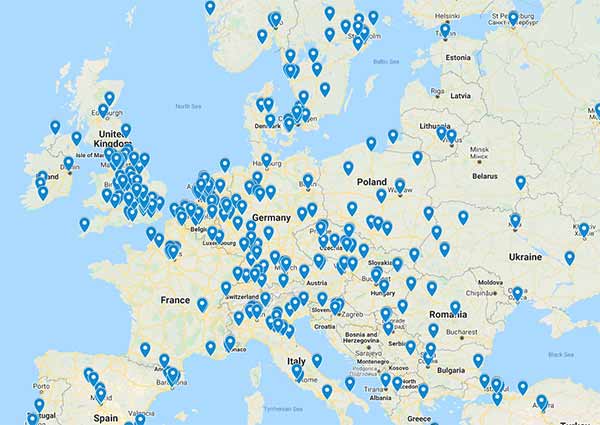 Unlike the map of North America, this one doesn't seem to match population centers quite as closely, except maybe for the UK (do the British still consider themselves European? Have they ever?) France, for example, seems pretty empty (except around Paris) while there's a largish cluster of customers in Belgium and The Netherlands, and somewhat surprising to me at least, Prague (which I once visited and although the January weather was dreadful, the city and people were lovely). And some action around Rome and the north of Italy (reminding me of the eternal puzzle of who has better food: Northern or Southern Italy? I'll take both, thank you.).

Is there legacy code in South Asia? 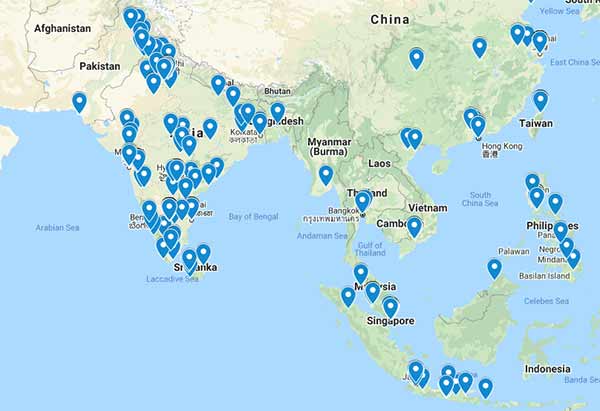 Where's the action here? Clearly India is a big player, but also Indonesia and the Philippines. And all three of these countries have fast-growing economies with a serious tech component. However, I expect that most of the legacy application modernization work (indicated by the points on this map) are being done for companies headquartered elsewhere. For example, I know one dot represents a US-based financial services giant who contracted to a US-based global SI, who in turn has tech centers in Asia and South Asia working on a large legacy modernization project.

Of course, that's not the whole story, as the map shows that the rest of the world (ROW) has migration cells practically everywhere:

With the exceptions of the "Stans", a large swatch of Russia and Mongolia, and many countries in Africa, we see migration activity almost everywhere in the world--and remember, this is only a 10K sample of a much larger population. Perhaps if I could plot all our data we'd see even some of those countries would get a pin, who knows?

Now if I could only convince management to send me on some customer visits to Iceland or New Zealand...