What the spending estimates mean for application modernization

As we said in our last blog post, Forrester's global IT spending forecast shows that PC sales are going flat and tablets (and smartphones) are growing.

This just in: tomorrow the sun will rise in the east.

Ok, so it's not exactly breaking news. In fact, it's almost a job for Obvious Man (motto: "No duh!"). 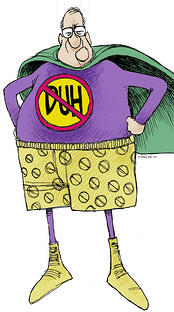 But if we double click (as Tom likes to say) on the news, there are some interesting tidbits and implications.

Forrester just released their 2013 IT spending estimates, coming on the heels of Gartner's earlier analysis (note: neither includes consumer spending). Although they count things differently so the totals don't match (Forrester predicts global IT spending at $2.1T; Gartner says it's closer to $4T) there's consensus on the winners and losers. Some interesting highlights from both reports:

Microsoft's crappiest year ever: basically acknowledging that the Surface RT is the tablet nobody wants, they took a $900M write-down and got the largest drop in stock price ever for their troubles. Exactly one yearbefore, remember, Microsoft wrote off $6B in reduced value for online services. PC and server sales are flat and Microsoft can't seem to connect on a tablet or smartphone strategy that can replace them. Their solution? One Microsoft.

One billion web users, says Akamai: The annual "State of the Internet" report says there are 733M IPV4 IP addresses representing over 1B people accessing the world wide web. Other tidbits:

Moto announced three new Droid phones with 8 core processors (!) and touchless control. 5" screens and Kevlar backs complete the story. This is not your Daddy's cellphone.

We are living in a connected world of ubiquitous computing. Connected because highspeed networks are everywhere (including cellular) and everything is connected to them. Ubiquitous because even your cellphone is now an 8-core computer. Let me repeat that: that little thing in your pocket has 8 microprocessors in it.

Imagine a world with an ever-present network with unlimited bandwidth. Just imagine for a moment how that would change things. Why store data locally? Why have local applications? Why silo data?

The fact is, you wouldn't.

Most--if not all--data would move to the cloud (private or public). It's much more useful if you can access it from any device and share it when you need it, not to mention never worrying about hard disk crashes and backups again.

Apps? Sure, you could argue that some things might work better locally rather than as SaaS but again, if we had gigabit networks even that premise starts to get a little wobbly.

Data silos: anyone who's tried to collaborate on a spreadsheet or deploy an on-prem CRM across a distributed enterprise gets the value of cloud-based, shareable data. RSS, Facebook, YouTube, Twitter, Instagram, even LinkedIn are just natural outcomes of this idea.

That's where we're heading, if we're not already there. Limiting factors to the vision include HID issues with small devices (is there a keyboard on Google Glass? Of course not.), batteries, network bandwidth (particularly wireless to support mobility) and availability (we still have a big last mile issue in the USA). None of these is insurmountable--none looks worse that earlier technology problems long since overcome.

The Age of the Desktop is drawing to a close. Just as businesses who saw the Age of the Mainframe beginning to decline and subsequently embraced new paradigms like client/server found competitive advantage, those businesses who embrace the Age of Mobility (think BYOD) will again find competitive advantage. And that a means application modernization--either through migration or replacement--is vital.