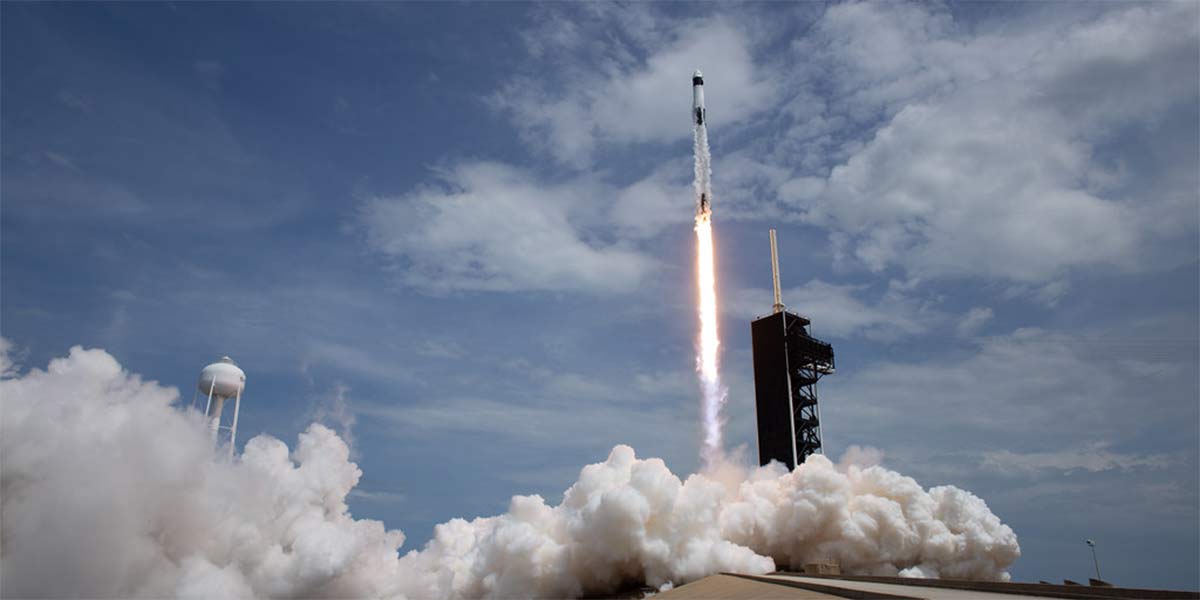 Congratulations to SpaceX on successfully transporting four astronauts to the ISS. This accomplishment marks a significant turning point in the space program, and it also proves a vital point about dealing with legacy applications: that it's far far better to migrate them then to rewrite them.

Bear with me, it will all make sense.

Since the retirement of NASA's space shuttle program in 2011, all servicing of the International Space Station has relied on old-school Russian Soyuz rockets. A few days ago (Nov. 15), to great fanfare, SpaceX launched four astronauts in their reusable autonomous space craft, ending the government monopoly on manned space travel.

Consider the breakthroughs: booster stages that are not only reusable, but return to earth via a gentle upright landing on a drone ship; a space ship that flies, navigates and docks without a pilot; and space suits that are more Star Wars than Buck Rogers.

The SpaceX team got to this historic point by following an engineering practice of incrementalism, rather than a big-bang approach. This same playbook worked perfectly for the Apollo project in the 60s, where the goal was a manned mission to the moon. In that endeavor, the US started out with an enormous goal set by President Kennedy ("send a man to the moon and return him safely, within the decade") at a time when the space program was mostly known for failure--that is, making very expensive fire crackers to explode at Cape Canaveral.

NASA approached the goal with a staged incremental approach: first get someone into space and recovered (Alan Shepherd), then someone in orbit (John Glenn), then a new space ship (Gemini) to put two men in orbit and a "space walk", then three men in a larger vessel (Apollo) to travel to the moon, circle it once, and return safely. Finally, of course, in June, 1969, Apollo 11 became the first manned mission to land on the moon.

Incrementalism. Solve the small problems first, then move forward one step at a time.

SpaceX: First we build a rocket, then we see if it can land itself; then we see if it can land on our ship at sea, then we send an unmanned ship to dock with the ISS, finally we put it all together and send people up to the ISS. You don't take the next step until the current step is correct and reliable. You reduce the risk of any single step, and--perhaps most important--reduce the risk of the final objective.

Migration is incrementalism while rewrite is big bang.

What good are they?

Money spent building Mercury and Gemini rockets and launching them is just money we could be spending building an actual space ship that could go to the moon.

That's a big bang approach. It's how you build skyscrapers: you don't start with a 10 story building and keep adding 10 stories at a time.  You build the whole thing, at one shot.

So what's the difference between a moon shot and a skyscraper?

Generally we know how to build skyscrapers. In any large city in the world these are under construction virtually every day. You want a 70 story office tower in Seattle? Getting the approvals and financing is a harder problem than figuring out how to build it.

Rewriting software is  a big-bang approach. Migration is an incremental approach.

I know lots of people will disagree because: Agile. With Agile, they think, we'll rewrite that legacy app in sprints, controlling the scope and risk of each sprint. And that will be incremental, not big-bang.

Legacy applications that matter tend to be large and complex. If they were small and simple they would have been rewritten years ago. No one in their right mind keeps a VB6 application that's 2 million lines of code around unless it's both high value and super complex. They aren't vanity projects or school assignments: they are mission-critical apps that grew by accretion, not design, over years of modification by a variety of different developers, all of whom had their own ideas of how to do things.

They have business logic scattered over a zillion entry points and conditional tests; logic that is reliable if opaque.

They have no comments, out of date comments, or incorrect comments from copy/paste operations from other modules.

But the thing is, they work. They do real, important work every day. How they work, and why they work, may be a mystery, but they work.

Don't take my word for it; let's go to the experts, in this case Gartner (from Use Continuous Modernization as an Alternative to Rip and Replace):

"In some cases, a single and sequential modernization program might be the most efficient approach in removing technical debt and creating a digital platform. However, there are important reasons why gradually transforming legacy applications to platforms is often a better option:

Making application modernization a continuous and gradual process will provide a way around these three challenges."

Let's say you've got a critical, large, complex legacy app. You'd like a nice new shiny app to replace it.

But you don't have unlimited time and budget to do it.

Migrate, refactor, and strangle is an incremental approach to modernization. Deciding to rewrite is a moon shot. I'm not saying it won't work, but we hear from people all the time who tried it and eventually gave up, electing for migration as a more feasible and less risky (not to mention quicker) way to get off a legacy platform.

As my mother used to say at the dinner table, "Try it; you'll like it."