Is the iPad mini the new black for application migration?

Interesting article in the Inquirer (no, not the one with such accurate pictures of aliens) hinting that perhaps the larger 10" screen of the original iPad is quickly losing favor compared to the smaller one from the iPad mini. 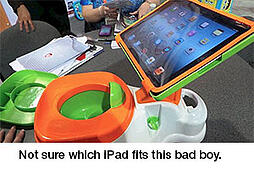 Of course there may be other factors here as well. It could be that lower-price alternatives (like the Kindle) are hurting sales of Apple's larger (and more expensive) tablet. IDC predicted in Dec 2012 that both iPad and Android market share would slip a bit from 2012 to 2016, with Windows moving forward from basically zero today to about 10 or 11% in 2016 (still trivial compared with the predicted 50% for iOS and 40% for 'droid).

Apple has also slashed orders for iPhone 5 manufacturing, according to various reports.

Other rumors 'o the day include one that the US Army has ordered about one zillion copies of Windows 8 tablets. Why Win8? Because of security--Microsoft long ago went after FIPS certs while Apple and Google dragged their feet. So although the General's kids will be playing on their iPad Minis, Papa will be checking email on his Surface.

If you believe IDC, by the time the next Presidential campaign debates are in full swing we'll have three big tablet platforms to target; writing every application in triplicate may be more than most devs want to take on so HTML5 sounds better and better for application migration.