I was looking for something and this popped up: an interview Playboy did with Bill Gates in 1994. Since I was still at Microsoft in '94 I read it (again) for nostalgic reasons more than anything else. 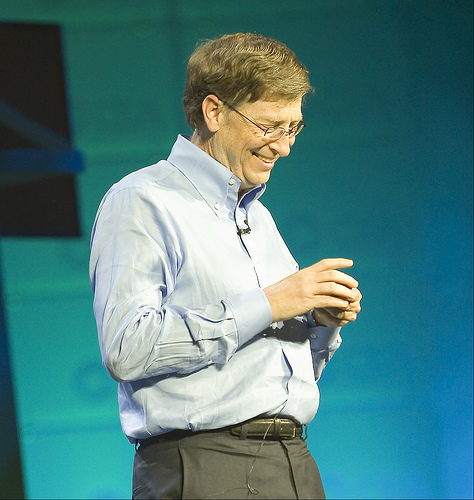 [In 1994 I was working in the Visual C++ group as a Product Manager--I think we were working on Version 2.1 or so--we had separate 16-and 32-bit versions). My laptop ran NT (remember NT?) and I had a DEC Alpha in my office that also ran NT but had no application software for it (it did run NT super fast, but it turns out an OS by itself is not all that interesting).]

Reading this interview with Bill the other day, I was struck by how many of his prognostications have materialized over the intervening 19 years. A lot has changed since then--Visual C++ is no more (it's now Visual Studio and includes a lot more than C++); NT is history since the Windows code base was merged with Vista; Microsoft is significantly larger (currently there are 90,000 people working there--when I started in 1987 there were maybe 1000); and although they are still the dominant platform on PCs we see those same PCs falling in both total sales and relevance as other devices and other platforms have emerged so that for the first time since the IBM PC was released Microsoft is no longer the major player in the fastest-growing sector (in this case smart phones and tablets).

Smarter people than me have opined that it's relative easy to predict the future of technology; it's just really hard to predict the timing. So with that in mind (and the realization that hindsight is always 20-20), let's review Bill's on his vision of the future from this one interview:

1. "In the coming information age, access to documents, broadly defined, will be done electronically, just by traveling across a network that people now call an information highway..."

Remember in '94 the Internet was a pretty new concept, although email and bulletin boards were popular. I think we can give Bill credit for forecasting the shift to the paperless society (PDFs, document scanners, electronic bill presentment) as well as ebooks and the way we find, retrieve, share, and consume textual information (Wikipedia anyone?) on the Web.

2. "Say you want to watch a movie. To choose, you'll want to know what movies others liked and, based on what you thought of other movies you've seen, if this is a movie you'd like. You'll be able to browse that information. Then you select and get video on demand. Afterward, you can even share what you thought of the movie."

This pulls a lot of current services and paradigms together, including things like Netflix and Hulu as well as the affinity forecasting that Amazon and Netflix do (Netflix likes to recommend movies for me that my wife will like, because although we have made progress here it isn't able to deal with a couple that share a single Netflix account).

Video on demand: I think when this was written people saw this as what was commonly available in hotels or PPV on TV; probably because the monitor as interchangeable TV or computer screen didn't yet exist. TVs were big; computer monitors were small. If Netflix streaming service isn't video on demand I don't know what is.

Last piece: reviews. Reviews via IMDB, Yelp, Angie's List, Amazon, etc have transformed consumer decision making and shopping. Who today doesn't look at the consensus of opinion about something new before buying (or watching)?

3. "Microsoft is spending a lot of money to build software that we think is better. It will run in the box in your home that controls your set as you make choices. We're involved in creating the much bigger piece of software at the other end of the fiber-optic cable, the program that runs on the computer, which stores the movie data base, the directory and everything else."

Microsoft bought WebTV, which of course was a flop. They were not successful getting into settop boxes and other companies carved out dedicated media servers. In '94 Linux was not a big factor, either, on the server side. Microsoft had their attempts at home media servers but they were less than wildly successful.

4. "Or say the President is making a speech. Everybody in the nation gets to push little buttons to say yea or nay, and gathering all that information so it can be displayed within a second or two is tricky."

I know he was talking about polling or maybe even electronic ad-hoc voting but if you think about how Twitter is used during a Presidential debate this sounds pretty accurate.

5. "We are involved in a new generation of fax machines that we think will be better and easier to use. And a generation of screen phones [a standard phone with a minicomputer] in which the typically cryptic buttons are replaced with a graphics interface. We're also working on software that runs in printers. We've worked with people on car navigation systems."

This is like me at the plate facing Felix Hernandez (You're OUT!) Gotten a paper fax lately? How's your screen phone working out? Do you still use a printer? Is it running Windows? As for navigation, you can buy a Garmin at Amazon for under $200 that's as good or better than any built-in nav system. And finally before you say "iPhone" see below...

6. "Instead of using keys to enter your house, the Wallet PC identifies that you're allowed to go into a certain door and it happens electronically. Instead of having tickets to the theater, your Wallet PC will digitally prove that you paid. When you want to board a plane, instead of showing your tickets to 29 people, you just use this. You have digital certificates. Digital money. It has a global positioning thing in it, so you can see a map of where you are and where you might want to go. It's our vision of the small, portable PC of, say, five years from now."

I'm putting this one down for an accurate picture of the smart phone, although only by accident because I doubt that the "wallet" was conceived as being primarily based on a phone. Cellular telephones were common in 1994 but were basically used for voice. So no one as far as I know, clearly and compellingly predicted that those devices would turn into the ubiquitious small computing devices they are now. It was two years after this interview that Microsoft released the Handheld PC, their foray into this pocket-sized PC space (of course the Palm and other PDAs were around, see Newton comments below). Having worked on the Handheld PC I can tell you it was truly an solution in search of a problem.

Everything in Bill's quote above (except the house key replacement) is common today--you can buy movie tickets online with your phone; you can present your boarding pass on your phone; digital certs are common in business but not all that interesting to consumers; digital money? Think how NFC allows you to pay for your double-tall skinny soy latte at Starbucks with your phone. And GPS? As Apple found out with iOS 6, maps are a pretty significant part of the smart phone value prop.

7. "I used one of the original Newton's for a week, and its available if you'd like it...It was supposed to do handwriting recognition. But, based on the initial product, people are skeptical about whether handwriting recognition really works. They did some nice technical work on the product. Unfortunately, its not a useful device as far as I'm concerned, so it'll probably set the category back."

What's interesting here was the long-held assumption that a mobile device had to support handwriting recognition to be successful, and certainly the Newton (which was huge flop for Apple) missed by a mile. (Today's equivalent would be the often-hilarious way that speech-to-text gets rendered.) What no one saw coming was the thumb revolution--the ability (particularly of teens) to use their thumbs to enter text quickly, creating a new HMI paradigm and writing handwriting recognition off largely for good (of course, Bill had a go at it himself with the original Tablet PC, another swing-and-a-miss).

What sticks in my mind the most from re-reading this? The extent to which mobile devices have become a major factor in our overall computing experience. Long-awaited tablets are just another step in the journey to the next chapter; smart phones look more like tablets every day (tablets are shrinking and phones are getting bigger); more and more interesting mobile applications are running on Android and iOS not just Windows; and even RIM has finally jumped into the pool.

When we look back on 2013 from a similar time gap (that would be in another 19 years, or 2032), how will things have changed? What will mobile devices look like? What will application develoment look like? Will we finally have an end to coding? Will computers program themselves?

It will be interesting to find out.