So you've got a Visual Basic application that's as old and creaky as Grandpa's Buick and it's time to modernize it? Awesome!

It's going to be great to have that application running on a tablet or iPhone, especially after you add all the new cool whizbang features your users are going to love. 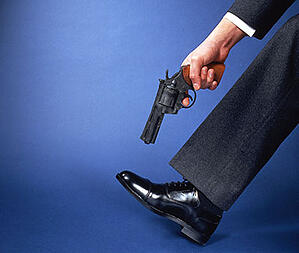 Here's a few tips to make sure the project will fail miserably, destroy your career, and generally threaten modern civilization:

1. Start with a clean sheet of paper

Nothing says progress like throwing out the old and beginning afresh.  So let's pretend the old application doesn't exist and find out what the new one needs. By developing a completely new set of requirements and design parameters you'll get to make lots of new friends in the company and spend time writing, not coding.

2. Go for the latest and greatest programming stuff

Now's your chance to try out F# or Go instead of boring old C# or VB.NET. Those things are so 2011. Don't know F# or Go? No problem! Take a class or two. Travel. Download some sample code. I'm sure it will all be fine in the end.

3. Expand the SOW halfway into the project

Hey, it's software, it supposed to be agile. Here's some ideas to take to your boss: Put the whole thing in the cloud. Switch from Go to HTML5. Switch from Go to Erlang (extra points for this one). Turn it into a game based on Angry Birds. Add synchronization with the ERP system. Add touch. Any one of these could keep you employed for the rest of your life.

Once when I worked at a Really Big Company they spent several years and many millions of dollars re-doing their HR system when they realized it wasn't going to get done. So they started over. I left but as far as I know they could still be working on it.

So if you want to avoid some of the grief above, check out migration instead of a rewrite. You might just be glad you did.