The Upgrade Options tab is the third step in setting up a migration project with the VBUC, after selecting the projects to migrate and resolving the references. This step is very important since this defines how the VBUC will generate the .NET code.

The following screenshot shows the main elements of the Upgrade Options tab: 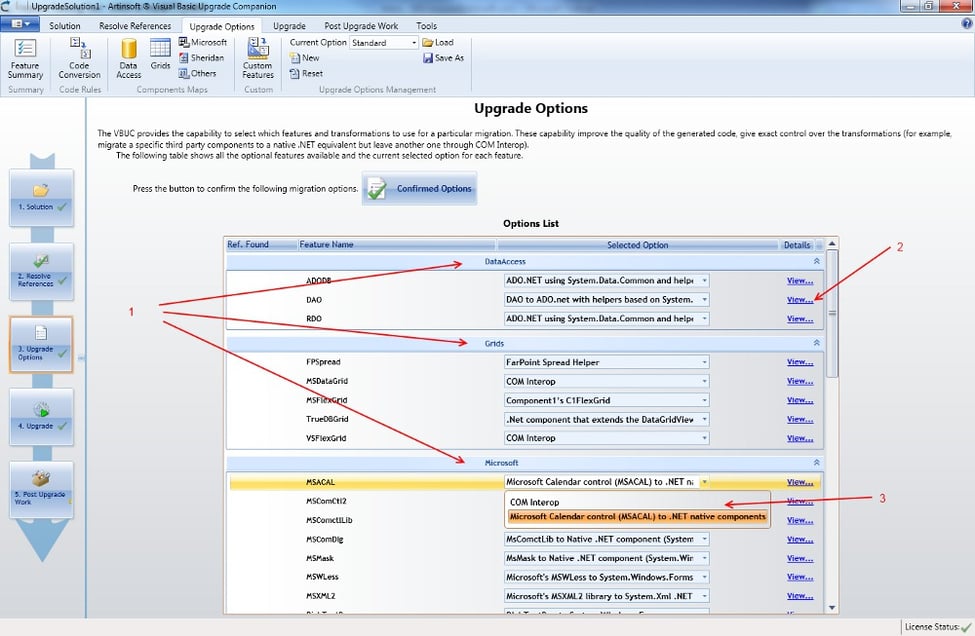 This is a description of these elements:

1. The upgrade options are divided in sub sections, where each section refers to different types of components or categories of options supported by the VBUC:

2. For each one of the upgrade options the VBUC provides a link with “details” for that option. This explains in detail what each of the options will do and also provides a snippet of code in each one of the languages (VB6, C# and VB.NET), showing how the original application would look like and how that code would be migrated if that option is selected.

3. Each of the upgrade options has a set of alternatives that can be selected and that will define the behavior of the VBUC for that particular option. This dropdown will select this behavior.

This is a detailed description of each one of the upgrade options and the different upgrade choices for them, with suggestions on when to use one or the other.

In general, for every option that has to do with a third party component, there will be a choice to migrate it using COM Interop. The use of this option is also the default for components that are not supported by the VBUC.

The use of COM Interop is recommended if you require a fast migration and are not markedly worried about future maintainability of the application or performance issues.

COM Interop will usually have some performance drawbacks, and there are components that simply won’t work through COM Interop in .NET, so this is something that needs to be researched before executing the migration for any component that you plan on using through this method.

To reduce the amount of manual work involved in the migration of the VB6 code to .NET, Mobilize has created a set of helper classes in .NET.

The helper classes provide .NET versions of functions that were available in VB6 or provide .NET wrappers for other .NET components exposing interfaces similar to those in the VB6 controls they will replace. For example, the RecordSetHelper class wraps the .NET DataSet class and provides a set of properties and methods available in the RecordSet class in VB6 thus allowing a more direct migration of the VB6 code to .NET.

For each one of these helper classes, Mobilize provides the source code in .NET as part of the migrated application, therefore the client can modify these in any way they want once the migration process has been completed.

The options in this section define how the data access components will be migrated.

These are the options for the grid controls supported by the VBUC out of the box. This list includes the most common controls used by VB6 applications.

It is worth remembering that the VBUC is a fully customizable tool, therefore if an application uses a grid control not present in this list, it is possible for Mobilize to create a customization to migrate it automatically to a .NET component. It’s also important for the options that use components that are not part of the .NET Framework

This section includes options to migrate the common controls created by Microsoft and shipped with Visual Basic 6.0.

This section provides different options to migrate other controls that are common in VB6 applications and that don’t fit in any of the other sections.

As with the previous options, all these components have two alternatives when migrating them to .NET, one is the migration using COM Interop and the second one is to use .NET components.

Sheridan controls (now Infragistics) were a set of components widely used in VB6 that provided some functionality not present in the built-in VB6 controls. Since these controls are so widely used Mobilize has added support for the most common of them.

The mappings created by Mobilize for these controls change some of them to equivalent third-party components in .NET or standard .NET controls. As usual, there’s also the possibility to continue using the ActiveX controls through COM Interop.

The options in this section don’t depend upon the projects having specific controls or components (as did the previous sections). These options are more related to the way the code is generated in some scenarios.

Default properties are a feature of VB6 that allows the developer to access a property of an object in an implicit way. E.g, you can assign a TextBox to a string variable, and VB6 will assume that you are assigning the value of the Text property (which is the default property).

Since this is not supported in .NET, the name of the property must be invoked explicitly in the migrated code.

In .NET, every form in an application has two files by default, one contains the information about the visual elements (such as position and default values) and the other one contains the logic associated (methods and event handlers).

This option allows the user to select where the constructor of the form will be located (it won’t affect the behavior of the application and it’s just a matter of style).

The Load event of the forms behaves in a different way in .NET and VB6, and the correct way to migrate it will depend upon the way the VB6 application is written.

In VB6 the form load event can be called directly and executed before the form is displayed, this is not possible in .NET.

It's time to eradicate VB6